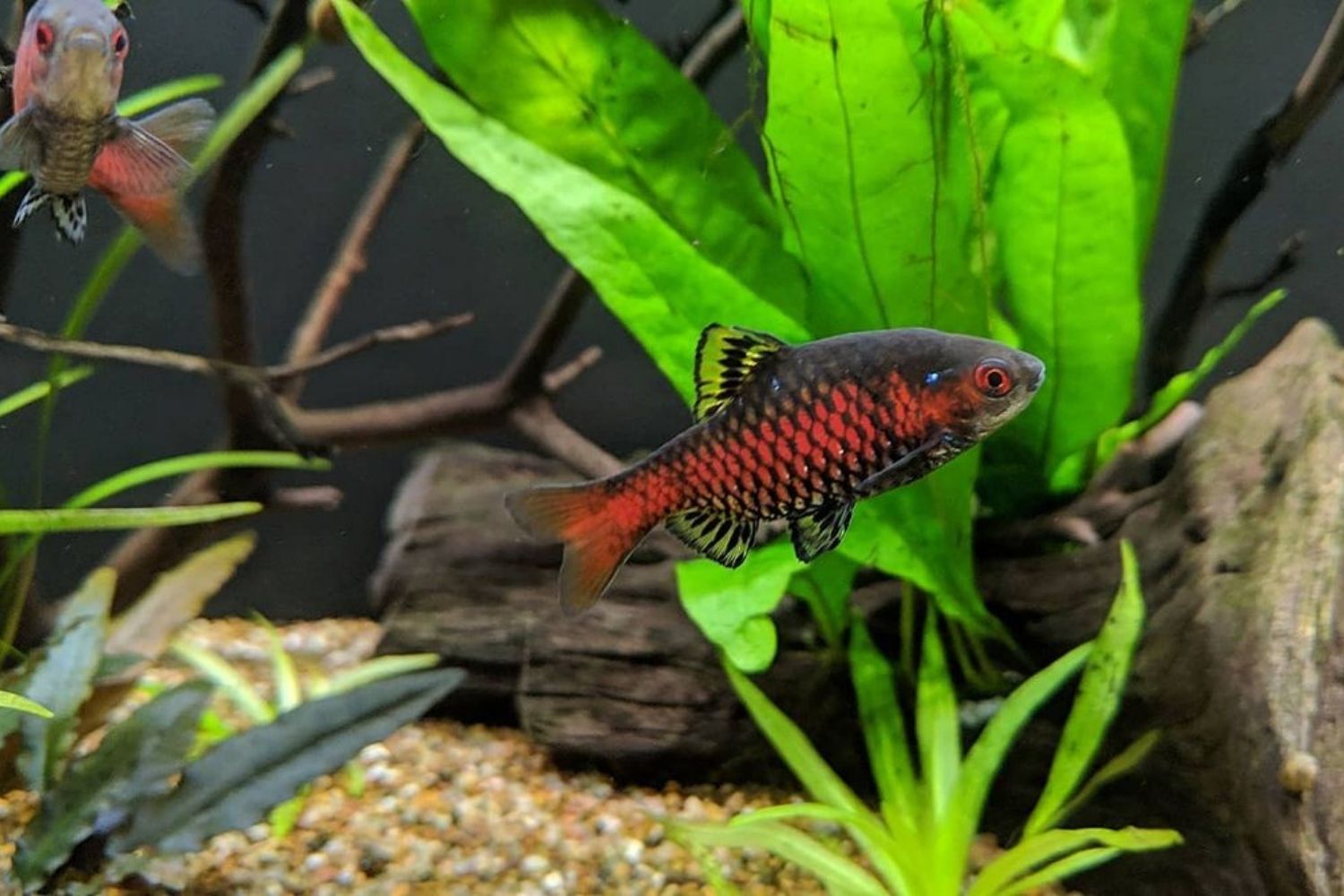 Odessa Barb, whose scientific name is Pethia Padamya, made its first appearance in pet enthusiast’s circles in Odessa, Ukraine, in the early 1970s. The word “Padamya” is Burmese for ruby because of the male’s vividly red color from head to tail which resembles that of the gem.

It has been introduced to the aquarium hobby for many years now and has only been described scientifically in 2008. Their popularity has grown significantly over the recent years, and it shows. It is a really active and generally peaceful fish that enjoys living in a community tank with its buddies.

It has a relatively small size which makes it viable for most tanks.
Having many plants or not in your aquarium isn’t much of a problem for Odessa Barbs as they do prefer spaces for roaming and investigating inside the aquarium as energized as they are. It’s best to include rocks or driftwood at the bottom for them to enjoy.

Keep reading to find out more about this fish.

Odessa Barbs are a very low-maintenance fish as they are comfortable with a variety of water parameter ranges. One thing you need to always remember is that you have to keep the water conditions consistent without sudden changes because they are very sensitive fish.

Another thing you need to keep in mind about this fish is that you should not cramp your aquarium because as much as it likes to explore, it requires spaces to swim freely, as mentioned earlier.

You should keep it in groups of 5 or more. This fish becomes semi-aggressive if kept in a group of less than 5.

Some interesting specifications we enjoy about Odessa Barbs :

This fish has been frequently confused with the less colorful ticto barb, so you need to be careful not to mistake them.

Odessa Barb originates from freshwater ponds and rivers, particularly in Myanmar, and Southeast Asia. More specifically, it’s known to be found above the Anisakan Falls and also the lower Chindwin River. Its natural habitat is located at around 3000m above sea level.

One unique fact is that this fish can be found in a man-made pond fed by a small stream in a village called Toe Gyi, Mandalay.

Myanmar had become home to many other freshwater fish species when in 2018, a conservation group FFI discovered 21 new fish species. One of them is Panda Garra.

They are simply unique in their appearance. How to notice their gender? Females tend to have a body in silver and pink with a black spot above their pectoral fin. Meanwhile, males are black to silver in color and have a unique bright red line going horizontally from the head to the tail. Because of that is called The Scarlet Barb.

These fish look like they’re glowing, which makes them fun and pleasing to watch.
They are very beautiful and lively fish. As we’ve said before, you all know how active and peaceful these fish are, and the only times they can become nervous are when there’s less than a group of 5 and very rarely during the breeding season. Most of the time, you could say that these fish are chilling.

Odessa Barb is an omnivore, and it is very simple to feed them if you follow these steps. They do require a variety of food given the fact that they spend a lot of energy roaming around the tank, so the recommended food to feed them are :

The best way to feed them in order for them to maintain their bright color and avoid overfeeding is through a consistent schedule where it’s best to feed them twice per day. While you are feeding them it’s recommended to feed them as much food as they can eat in a few minutes.

Setting the right conditions for an Odessa Barb is pretty easy and low maintenance. Since it’s a freshwater fish, you need to accommodate the tank to their natural habitat characteristics which are not hard. They are used to a lot of vegetation, so it’s best to have as many plants as possible without cramping them. They will spend a lot of time swimming around the plants. Water Wisteria and Hornwort are two specific plant species that are the most common choices for them.

Trying other plants is very much possible, as also rocks and driftwood, since they like to investigate and check out everything in their habitat.

The recommended minimum tank size for Odessa Barb is no lower than 30 gallons (110 liters). Knowing these fish love to swim around and are very active, if it’s possible, a slightly larger tank would be perfect for them.

Odessa Barb’s water parameter ranges are very generous for anyone with or without fishkeeping experience to work with. The most important thing is to keep things as consistent as possible because they are a very sensitive type of fish and will react to sudden changes.
We recommend:

As a precaution, it’s advised to perform some tests when you first set up their tank to check these parameters regularly. Once you are sure that everything is stable, you can start doing these tests less often.

This species is exceptionally hardy and is not prone to any unique diseases. As freshwater fish, they are vulnerable to typical tank diseases. Ich, which presents as white spots, is a common one. It can be easily avoidable by always checking on your tank’s conditions and adding the proper medication to the water, but if left uncared, it can eventually kill your fish.

The most common signs for you to notice your fish is not feeling well are:

If you notice any of these signs, it’s best to act quickly and talk to your vet, isolate the fish and take the proper medication to treat it.

All these can be avoidable just by taking care of your fish, but of course, there might be exceptions.

These specific species exhibit sexual dimorphism, which allows for easy identification of the sexes. The Odessa Barb breeding process is actually pretty simple. You are going to need to place these fish in a breeding tank first and make sure there are twice as many females compared to males. Including plants in this breeding tank it’s recommended. It won’t take long for the pairs to develop and it’s going to be very easy to notice that because of the change in their behaviors afterward. Odessa Barbs are egg-scattering free spawners exhibiting no parental care.

After they lay their eggs, it is advised to remove them from the breeding tank because there’s a risk they might eat the eggs.

These eggs should hatch in 24 – 48 hours, with the fry-free swimming around 24 hours later. They should be fed on an infusoria-grade food for the first few days. Until you notice they got l large enough, try to feed them with microform, Artemia nauplii, or suchlike.

Odessa Barbs are very peaceful fish, and they do prefer to stay in a community and to make sure that they coexist in harmony with their other mates. Here are some of their best friends :

Other types of peaceful fish that are about the same size or that won’t mistake them for food are welcome to experiment on. You can use Subwassertang as an aquatic plant in your tank. It will give your fish more space to hide and play.

It’s not advised to keep common freshwater snails in one aquarium with these fish.

Conclusion: Are Odessa Barbs The Right Fish for your Aquarium?

Absolutely yes, these fish will make your aquarium a joy to watch. They are easy to take care of and enjoyable with their bright colors and endless energy.

Odessa Barbs are a very unique freshwater species that are very peaceful and don’t need a lot of maintenance so they are very much recommended to be part of your aquarium for you and your family to enjoy their company.

Since many people have a lot of questions regarding these fish, we will try to answer some of them.

Odessa Barbs are extremely peaceful fish that live in a community. The only thing you need to keep in mind is to not place them in a group of less than 5 and occasionally they might become nervous during the breeding process.

Not necessarily, Odessa Barbs can eat some vegetables like cucumbers or lettuce but you should not get much overboard with feeding them with these.

Odessa Barbs generally live 3 – 5 years but there have been rare cases when they might live slightly more if you take good care of them. 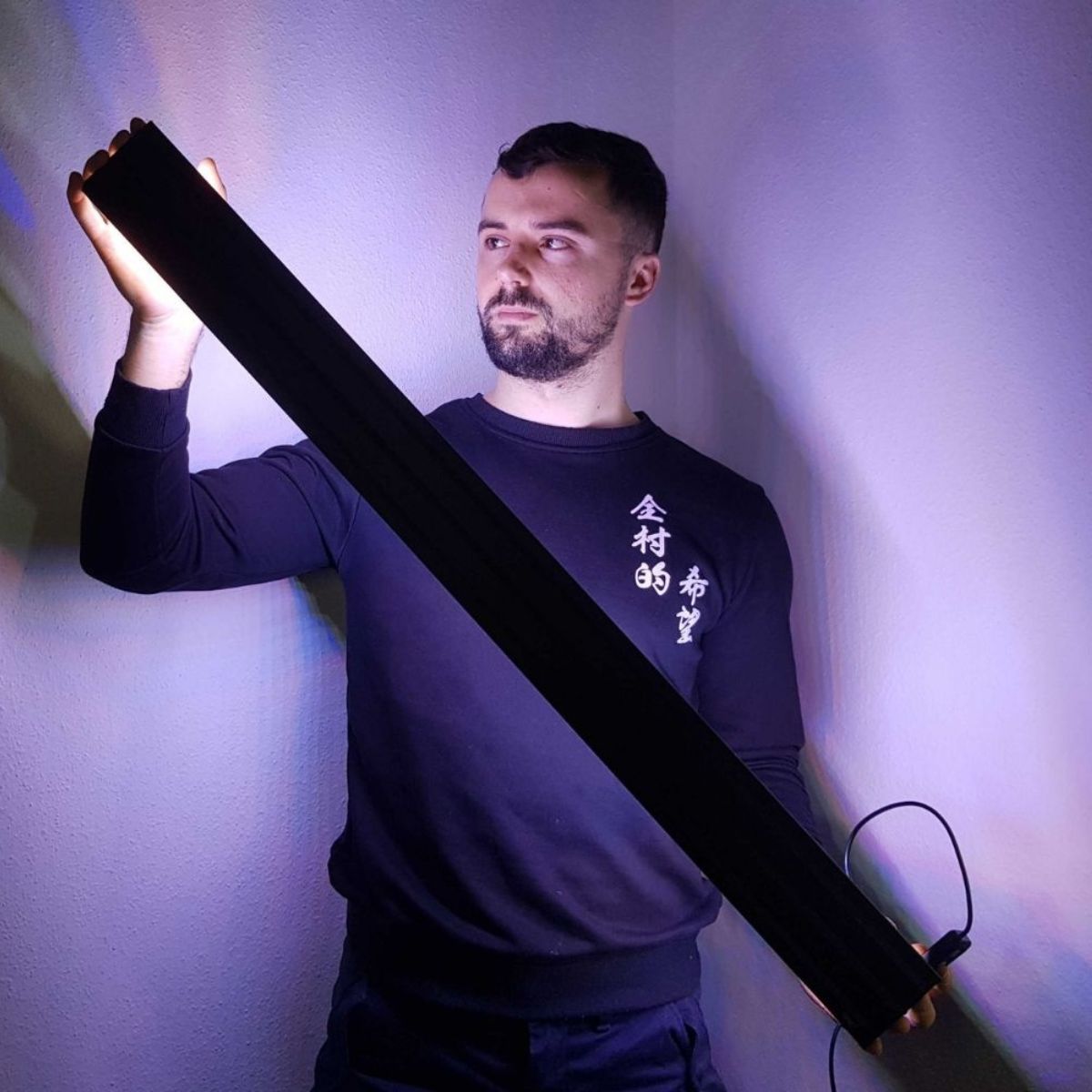