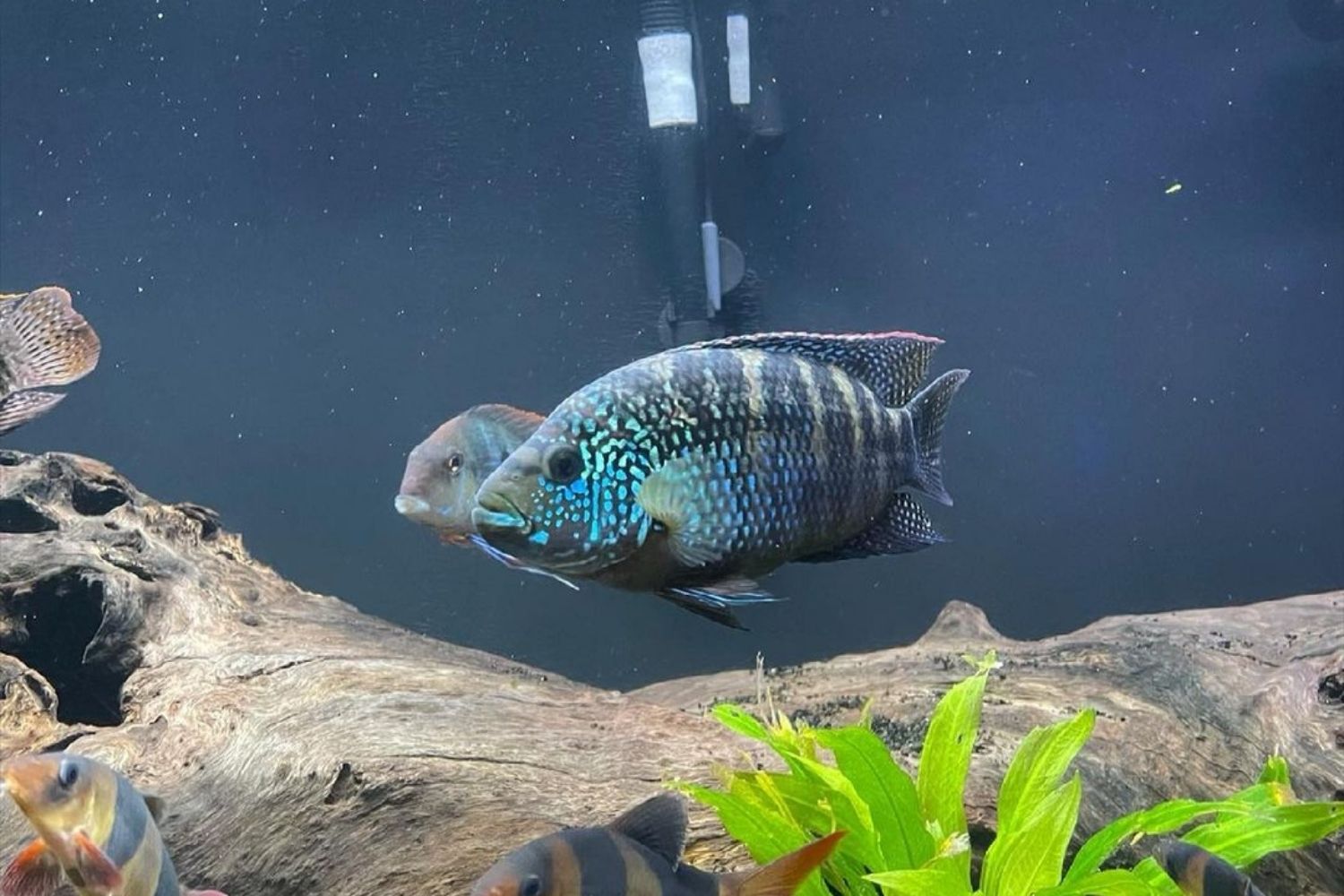 The Jack Dempsey Cichlid fish will enchant your tank, and it is very adaptable, which means even if you are a beginner, it won’t be a problem to take care of him, also with the information that you will get in this article, you will fall in love with this fish species.

It is very good the fact that they can live better alone because you won’t have to take a lot of other fish, but also if you want more, you can add some tank mates who are mentioned in this article. Read the article and learn about Jack Dempsey Cichlid’s care, diet, lifespan, and more, and if you have any questions, feel free to leave a comment!

It is not ordinary to go across a freshwater fish that carries a human name, although if there were an Oscar Award, the Jack Dempsey Cichlid fish would be a familiar name when you would listen to it. Also known by the biological name Rocio Octofasciata, this fish gets that name because of its aggressive behavior and its cruel look. These characteristics were also known as an American boxer William Jack Dempsey Harrison. The first thing that you will notice as soon you will see this wonderful fish, Jack Dempsey Cichlid, is the most obvious thing the fish has, the pearlescent coloration.

The fish is full of colors which makes it very attractive. It has dark purple-grey skin and a mix of blue gold and green sparkles all over its body.

The fish has a dark-colored line between his eyes. However, there are a lot of stripes that are along the fish’s body, and also, on the caudal fin, is a black band. We also should mention that the fish’s colors change depending on the conditions that the fish will be in, which we will be able to discuss later in the article.

Some people choose to call the Jack Dempsey Cichlid fish a beautiful beast because of the fish’s behavioral traits. This is because of the fish’s bad behavior regarding his tank mates, this is the kind of fish that doesn’t like to share his tank space with others, and also, he will not tolerate intrusion. It is a very territorial fish, which means that it is better to leave them alone in the tank.

Besides the fact that this fish doesn’t like tank mates, there are also other situations or conditions which make the Jack Dempsey Cichlid fish aggressive. Just like Jaguar Cichlid, they become aggressive when you put them on a small tank, which does not have enough space for them to live their life to the fullest. Also, there is the fact that they do not take getting stressed lightly.

If you give them an aquarium with enough space, they can grow pretty well, males till 10 inches long, and females will stop at 8 inches (20cm). This fish can live between 12-14 years in an aquarium of the right size.

The Electric Blue Jack Dempsey’s skin has a vibrant blue color, smaller, and is also less aggressive. This fish has a reputation. As we know, it was named after a boxer. Although, this rough and ready fish has a secret. Even though it is aggressive, it has beautiful colors, maintenance, and ease of breeding. That’s why this fish is so popular in home aquariums.

The Jack Dempsey Cichlid freshwater fish is a member of the Cichlidae family and also is native to Central America. This kind of fish is very popular in Australia, they are usually sold for tropical freshwater tanks, but because of their aggressive behavior,r they are not suitable for community tanks. They can reach a length of 25 cm, and also they can live more than ten years.

The most convenient temperature for this is between 11 and 30 °C, but they can also survive at low temperatures between 8-10 °C in their native habitat. Also is important to know that they do not tolerate very high salinities.

Cichlid fish feed on a range of organisms, including insects, crayfish, worms, small fish, and also mollusks. In the wild, you can see them in soggy areas with murky and warm water. The females can lay around 500-800 eggs per clutch. Both parents protect the eggs, which are very aggressive with other fish.

This kind of fish hunts lives prey in the wild. This means that it is very important to provide them with a diet that is high in animal protein.

You can start the diet with your fish by using high-quality pelleted food. Also, you can use Omega One Cichlid Pellets or also the Fluval Bug Bites formula. Both of these pellets provide enough protein for the fish, but also you can use them for larger and older fish. It is also good to give your fish frozen or live food to make their diet  more perfect, for example:

The gorgeous Jack Dempsey fish are adaptable fish, which means that they can thrive in different water conditions and also feed them with different kinds of food. This is one of the main reasons that a lot of people, even beginners, are asking to have this kind of fish as their aquatic pet. You mustn’t leave the fish to dwell in water that is loaded with nitrogenous compounds, which by these the fish might break out of diseases.

I also would recommend going with sand or gravel because they like to dig, and with planted soil, it would cause a huge mess because they would break it apart. And also, they would look better against a dark substrate because they change their color to match the surroundings.

You have to prepare yourself if you want to keep this species because they will need a really big tank. I recommend a 55-gallon tank. When it comes to aquariums, the bigger it is, the better, especially when you have a large fish.

If you want to keep the Jack Dempsey Cichlid fish, a 100-gallon tank would be perfect. If you think that this will be a big investment for you, you should search for a smaller fish species. If you want to stay with Cichlid family members, then you can go for Convict Cichlid, as it can be kept in a smaller aquarium.

The filtration process is one of the most important parts because fish often put off the waste into the water, and the bigger they get, they keep producing more and more waste. Also, a heater is an absolute must for this kind of fish. It is better to get a kinda oversized heater than a small one. Jack Dempsey is very adaptable to a range of water conditions because their native waterways are very soft.

Even though Jack Dempsey Cichlid is a very adaptable fish, as we know, there are always some problems that can happen. The first problem that can happen with this fish is that when the young fish hatches, the fish’s parents split their jobs.

The male fish is protective and looks at their territory to keep other fishes safe. Meanwhile, the female fish watches the unhatched eggs, the juveniles, and the larvae. And also, if you see the parents that tend to eat the eggs or the larvae, you should remove the male from the tank.

Another important problem is that the female can lay up to 800 eggs, which means that the aquarium may be too small to hold all of them. But if you notice that the female gets overwhelmed, the best thing you should do is step in. I know it may look cruel, but you should take 50-70% of the fry, and also, you can use them as a portion of live food for other fish. This leaves the female concentrated on the remaining eggs.

Usually, the male is larger than the female, and it has bright colors. Also, there are fewer spots on the female body than on the male’s body. According to the behavior, the male fish tend to be more aggressive than the female.

As we know, as every kind of species, the Jack Dempsey fish also has some diseases you should know, starting with Head and Lateral Line Erosion. This disease is known as a hole in the head, which is caused by a lack of certain vitamins and also poor water conditions. The symptoms of this disease are that holes start to show on the fish’s head and in the body if the condition is not treated early. To cure this disease, you should create a therapy for your fish, including antibiotics which are very useful to cure the fish.

Skin Fluke, Gyrodactylus, and Dactylgyrussp are capable of attacking themselves. These disease symptoms are excessive production of mucus, weight loss, and also to rub its body against hard surfaces. To cure this disease, it is recommended to use several medications like formalin, anthelmintics, and praziquantel, which are found very helpful in getting rid of this disease.

Freshwater Ich, the most common disease for freshwater species, causes white spots on the fish’s body and causes the loss of appetite, and also they hide more than usual. To cure the fish from this disease is recommended to use formalin and malachite green.

As we said, this is a predatory fish species, just like Jaguar Cichlid. You have to choose your tank mates very carefully because he can either eat the fish that are smaller than him because, as we said is a very territorial fish species or fight to the death with other fishes. Some of the fish species that you can you as tank mates for Jack Dempsey Cichlid are:

Also, you can keep a group of 3-4 Dempseys fish in the same tank. Also, you must separate the fishes apart if you see Dempsey in a fight with their tank mates.

EpicAquarium.com does not aspire to offer any type of veterinary advice. This website's content is not intended to be a substitute for expert medical care. Always seek expert assistance if you have questions about your pets.